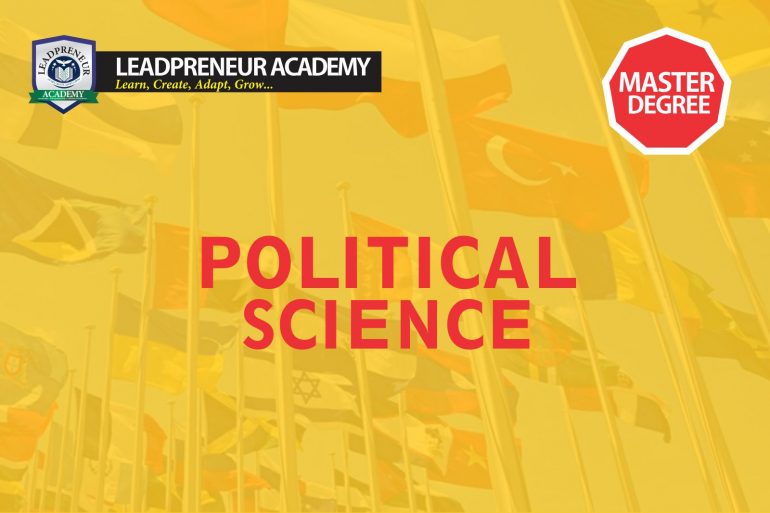 The MSc Political Science will allow you to apply theories, methods, techniques and concepts to a range of substantive problems, as well as developing analytical skills in key areas of political science research.

You will also have the opportunity to focus your studies on either political analytics or media and democracy. Focusing on data analytics will allow you to expand your analytical abilities through game theory and will give you the opportunity to work with different types of data relevant for quantitative political research and use different types of statistical research methods to answer research questions and test theoretical hypotheses.

Section 1: Strategic planning and coordination of preventive security devices
Strategic Goals
30M Lecture
American diplomacy and foreign assistance in the 21st century are based on three fundamental beliefs: our freedom is best protected by ensuring that others are free; our security relies on a global effort to secure the rights of all; and our prosperity depends on the prosperity of others. It is increasingly clear that, as stated in the National Security Strategy of 2006, “The fundamental character of regimes matters as much as the distribution of power among them.” It is for these reasons that Secretary of State Rice’s vision of “transformational diplomacy” requires that American diplomacy and foreign assistance function in an integrated fashion to advance our security interests, our development efforts, and our democratic ideals.

Section : 2 Strategic management of human resources
International and comparative strategic human resource management
The assumption that SHRM is a strategically driven management process points to its international potentialities. The employment relationship is shaped by national systems of employment legislation and the cultural contexts in which it operates. Thus, as the world of business is becoming more globalized, variations in national regulatory systems, labour markets and institutional and cultural contexts are likely to constrain or shape any tendency towards ‘convergence’ or a ‘universal’ model of best HRM practice (Belanger et al., 1999; Clark & Pugh, 2000; Kidd et al., 2001). This section addresses aspects of the international scene to help us place the discourse on
the SHRM model into a wider global context. In doing so, we make a distinction between international HRM and comparative HRM. The subject matter of the former revolves around the issues and problems associated with the globalization of capitalism. Comparative HRM, on the other hand, focuses on providing insights into the nature of, and reasons for, differences in HR practices across national boundaries.

Evaluating strategic human resource management and models of human resources strategy
A number of limitations to current research on SHRM and HR strategy have been identified: the focus on strategic decision-making, the absence of internal strategies and the conceptualization of managerial control.
Existing conceptualizations of SHRM are predicated upon the traditional rational perspective to managerial decision-making – definable acts of linear planning, choice and action – but critical organizational theorists have challenged these assumptions, arguing that strategic decisions are not necessarily based on the output of rational
calculation. The assumption that a firm’s business-level strategy and HR system have a logical, linear relationship is questionable given the evidence that strategy formulation is informal, politically charged and subject to complex contingency factors (Bamberger & Meshoulam, 2000; Monks & McMackin, 2001; Whittington, 1993). As
such, the notion of consciously aligning business strategy and HR strategy applies only to the ‘classical’ approach to strategy (Legge, 1995). Those who question the classical approach to strategic management argue that the image of the manager as a reflective planner and strategist is a myth. Managerial behaviour is more likely to be uncoordinated, frenetic, ad hoc and fragmented (for example Hales, 1986).

While we scrutinized rather generally the different stages of policy-making in the first section, we now refine our analytical focus and examine how certain structures in different countries can impact policy decisions. In doing so, we concentrate on institutions, cognitive and normative determinants, and national policy styles.

Analysing policy-making as a process: the policy cycle
1H Video

What are the main characteristics of policy-making? Basically, three features can be identified. First, policy-making occurs in presence of multiple constraints, e.g. shortage of time and resources, public opinion, and of course the constitution. Secondly, policy-making involves the existence of various policy processes. Governments are not unitary actors but consist of different departments that overlap and compete with each other. Thirdly, these policy processes form an infinite cycle of decisions and policies. Current policy decisions are not independent of decisions taken before, and policies under discussion today may have ‘knock-on effects’ leading to further policies tomorrow (Newton and van Deth 2010: 266).

There are no reviews yet.

Be the first to review “M.Sc POLITICAL-SCIENCE – Leadpreneur” Cancel reply