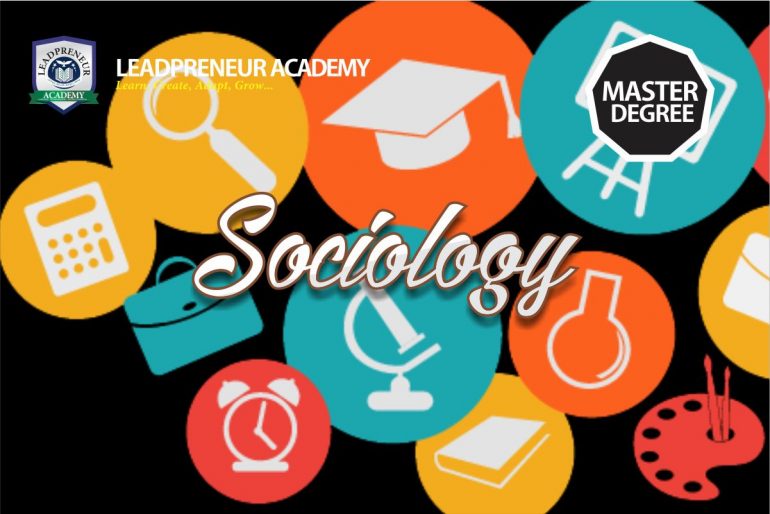 Sociology is a science that directly links the observer to the subject of the observation. Hence sociology has become a very important means of interpreting contemporary social life in an objective and critical manner. It follows, therefore, that there is need for better educated and trained sociologists. This programme offers a wide range of courses based on contemporary issues and needs such as; gender sensitivity, community development, peace building and conflict resolution, disaster awareness and management, etc.

The main objectives of the programme is to produce a number of specialized sociologists in the following areas:

Section 1: Conflict Prevention, Resolution and Reconstruction
Conflict prevention
30M Lecture
Conflict exists in all countries and in every level of society. Conflict per se is by no means a negative
force, rather it is a natural expression of social difference and of humanity’s perpetual struggle for
justice and self-determination. If managed non-violently, it can be positive, a source of immense
creativity and progress.
The challenge, however, is to avoid the violent expression of conflict without suppressing the root
causes completely. On a small scale, how do members of a community, faced with competing
interests or concerns, address them without resorting to violence or a breakdown of trust? On a larger
scale, in the case of nations and states, how can ethnic, economic, territorial or political rivalry
between sectors of society or groups be managed so that no side resorts to violence and all agree to
channel and resolve their differences more constructively?
No matter how poor or oppressed a society is, or how provocative and manipulative political leaders
may be, communal violence does not erupt suddenly. Inevitably, it is the manifestation of
accumulated aggression and hostility. In order to prevent violence, it is necessary to address the
hostile mistrust and belligerence before it reaches a point where each side believes that violence is
their only recourse. The goal of prevention is to create a situation in which differences and conflicts
can be addressed in a non-violent and constructive manner. This chapter provides an overview of
developments in conflict prevention with a gender perspective.

Peace, Negotiations and Agreements
1H Video
[more…]
Peace support Operations
30M Lecture
One approach to alleviating tensions, supporting a ceasefire or a peace agreement or creating a
buffer zone between hostile groups is to organise a Peace Support Operation (PSO) to foster and
reinforce conditions for sustainable peace. Since 1948 the United Nations (UN) has deployed 59
PSOs to conflict zones worldwide. Regional organisations, such as the African Union (AU), also
operate PSOs. The role and function of PSOs varies in each setting and has evolved over the past
50 years. This chapter provides an overview of PSOs, focusing particularly on the role of women in
UN PSOs, the impact of these operations on women in local communities and the potential for
women peacebuilders to engage with UN PSOs.

Section : 2 CONFLICT RESOLUTION
Introduction to conflict resolution
30M Lecture
The first edition of the book (1999) was written at a time when, despite setbacks, conflict resolution approaches
in peacekeeping, peacemaking and peacebuilding were widely seen for the first time to be central in global
politics in the context of what US President George Bush senior had (somewhat reluctantly) called a ‘new world
order’. His successor, Bill Clinton, and UN Secretary- General Kofi Annan both broadly subscribed to what we
identify as the ‘cosmopolitan’ worldview shared by many if not most of the founders of the conflict resolution
field. The aim of the first edition of the book was to explain what this meant. The second edition (2005)
coincided with the apogee of the ‘neo- con’ reaction, associated particularly with the administration of
President George W. Bush junior. The ‘global war on terror’ had come to dominate the stage, and conflict
resolution appeared to have been marginalized and its cosmopolitan values either dismissed or co- opted and
discredited. The aim of the second edition was to rescue the conflict resolution enterprise from this
entanglement, and to reassert its distinctive nature and contribution in the first decade of the twenty- first
century. This third edition (2011) appears at a particularly uncertain moment in world history, with the promise
of a new US administration once again ready to embrace conflict resolution approaches in wider foreign policy
formulation, but with mounting challenges from rising non-w estern powers (notably China), increasingly
complex links between state failure and international terrorism, a severely shaken global economy, and
embroilment in Afghanistan and Iraq continuing to wreak a fierce backlash against the whole concept of a
‘liberal peace’ – in which conflict resolution is often seen to be implicated. The aim of the third edition is to
clarify the role of conflict resolution at the beginning of the second decade of the century and to redefine its
cosmopolitan values in this uncertain and complex environment. Our central argument is that systemic complexity of this kind may make
conflict resolution more difficult, but for the same reason renders it all the more relevant and urgent.
As a defined field of study, conflict resolution started in the 1950s and 1960s. This was at the height of the
Cold War, when the development of nuclear weapons and the conflict between the superpowers seemed to
threaten human survival. A group of pioneers from different disciplines saw the value of studying conflict as a
general phenomenon, with similar properties whether it occurs in international relations, domestic politics,
industrial relations, communities or families or between individuals. They saw the potential of applying
approaches that were evolving in industrial relations and community mediation settings to conflicts in general,
including civil and international conflicts.

Section : 3 Economic Impacts of Immigration A Survey
Displacement E⁄ects in the Labor Market
30M Lecture
This section moves from immigrant assimilation to the e⁄ects of immigration on labor outcomes of
native workers. The conceptual framework is rst presented, followed by a review of earnings and
employment displacement studies. As multiple high-quality surveys are devoted to the extensive
literature on displacement e⁄ects, this paper presents highlights most relevant for this discussion.
Interested readers should consult referenced surveys below for additional details.

European Migration Patterns
30M Lecture
Immigration is now a prominent feature in the economic, social, and political landscape of many
European countries. In 2007, over 27m people living in EU15 countries were foreign nationals. This gure
partially represented migration within the EU region, which accounted for approximately a third of total

migration. The larger share was citizens of countries outside of the EU25 area, which comprised two-
thirds of migrants and 5% of the EU15 population. The aggregate size of this foreign national population was larger than the US comparable stock.

Be the first to know